The Typing Challenge for Term 1 of 2018 has seen multiple milestones broken.  Before the challenge even started, the counter for words typed broke 200 million.  The Monday of the challenge had the highest usage for any Monday since inception.  The Tuesday had the highest usage ever recorded for a single day since Typing Tournament Online was opened.

This serves as ample proof that students are increasingly engaging with the system and the fruit of their practice can be seen with the increased averages on the leaderboard from the year before.  It has been impressive to see how far some classes have come even in as small a period as six months from when their students first began to type. 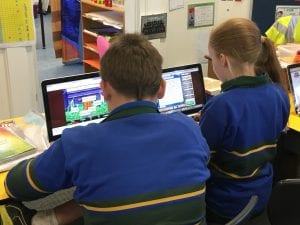 This challenge is also the first time that Australian students have been joined in the competition by students from New Zealand.  Over the past few months there has been a sharp increase in the number of New Zealand schools which have taken up Typing Tournament Online.  There is already an existing culture of fostering touch-typing in the country and they are proving to be quite adept in adopting the program for use in classes as well as in the home.  This is in no doubt partly due to the requirements for online testing for NCEA in New Zealand that has been there for some time and now seems to be the direction that many countries are progressively moving toward.

As always, more competition serves to bring out the best outcome when it comes to the Typing Tournament Challenge, with students more engaged than ever and improving their touch-typing skills.  It is never too late to get started as the challenge ends midnight on Saturday 24/3/2018 and there is still time for any class to snatch the win for their age range whether they are logging in at school or from home.  Best of luck to those participating and we look forward to the results next week.