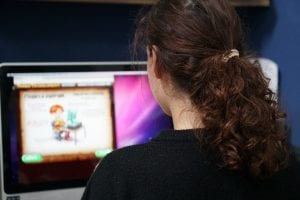 The following information has been adapted from EdAlive’s Typing Tournament – Guide To Best Classroom Practice.

While looking at the screen instead of the keyboard, students can see if they’ve made a mistake and correct themselves immediately, improving typing speeds.

To touch type correctly students must focus their eyes on the screen and not the keyboard; the prerequisite to this skill is the establishment of automaticity in the key strokes being typed for each letter and the use of the right fingers on the right keys.

Once these primary skills are established, the teacher needs to encourage students to focus their eyes on the screen and not the keyboard.

Here are some strategies for encouraging students to focus on the screen rather than their hands:

• Stealth Keyboard – Once students have demonstrated that they are able to type accurately and have passed the exit tests up to Chapter 4 on the map, the teacher substitutes the standard keyboard for one with all or some of the identifying letters on the keyboard removed. The lack of letter symbols encourages students to keep their eyes on the screen and to rely on muscle memory to complete their typing. Keeping keyboards from old computers and then colouring over the letter symbols with black marking pen or small blank stickers are effective ways of masking the letters.

• Cardboard box shield – Cut a cardboard box to shape so that it fits over the keyboard obscuring view of the keys but not inhibiting the action of typing.

• Tea towel – Whilst typing, place a tea towel over the student’s hands. This method was commonly used when teaching students to type on manual type writers.

• Blind fold typing challenge – Blind fold a member of the class and then ask them to type what is spoken to them and then check to see how accurately they were able to do it. Hold a class competition to find the best blind folded typist.