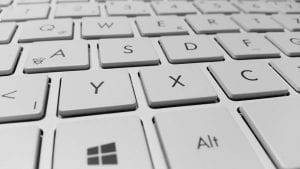 The overview of general capabilities as provided by ACARA is essentially just an overview. Like most of the capabilities it uses broad language in order to empower teachers to determine how capabilities are developed within their school’s particular context. Two or more different forms of work may achieve the same outcomes and develop the same capabilities.

Of the general capabilities, ICT has always felt a bit harder to have a conversation about. While there are a variety of reasons for that, the primary reason is because there is far less explicit instruction in the use of ICT. This is particularly true when compared to the main Literacy and Numeracy general capabilities that are constantly discussed and currently lamented as per priority 6 in the Gonski 2.0 report. Instruction on ICT is viewed more as something to develop in an integrated manner e.g. a student uses Microsoft Office while preparing a report on a curriculum outcome, a student uses Google Chrome to do research on a geographical feature.

While integrated work with ICT is crucial for both the enrichment of learning and general capability development, without explicit instruction in the very basics of using ICT such as touch-typing it loses effectiveness. Skills are developed and then developed further in authentic learning with integrated use. Reading and writing are distinctly different literacies in their own right and that is why there is a great deal of explicit instruction in both of these skills. Touch-typing should be no different, with explicit quality instruction that is then followed up with integrated use.

NAPLAN Online will actually be quite useful in this respect because it has forced many educators to re-evaluate the instruction that students are given in touch-typing in preparation for it. Personally I’ve had many conversations where ICT teachers, NAPLAN Co-ordinators and Executive staff have realised that the base level of skill that was assumed to have just been picked up along the way hasn’t been there. There have been multiple publications on this but the easiest reference is the APPA survey in 2016 that was performed with NAPLAN Online trial schools. Principals who participated in the survey overwhelmingly responded that ICT skills, particularly touch-typing, were in need of improvement for successful participation.

So why is NAPLAN Online going to prove to be of benefit? Because it is going to prove that such a simple yet utterly critical skill in a 21st century Australia such as touch-typing must be made a real priority and that should have been done as far back as 2008 when the Melbourne Declaration stated that, “in this digital age, young people need to be highly skilled in the use of ICT.” It won’t just be NAPLAN Online as other states and territories look to moving high-stakes testing into an online format, but it will be a great step forward for making basic ICT skills a greater priority rather than lip service.