Typing games have never been so important 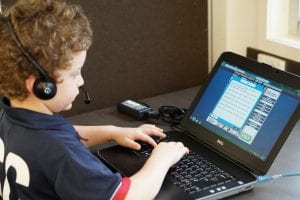 Typing games as a kid

It was 1990 when I first learned how to type, the same year that my father was laid off from an office job.  Kindly told that it was to allow him to enjoy his ‘twilight years’, the reality behind it was employing someone younger, cheaper and able to use a keyboard in an office workplace.  My father had never picked up the skill, preferring to do sums rather than use a calculator.  Nevertheless he bought himself a Commodore 64 and some typing games to practice on with the intention of finding new work.  The problem was that he’d previously boxed at amateur level for years leaving him ham-fisted.  His fingers were so big that he couldn’t hit a key without hitting five of them.

Due to his own experience he decided I should learn.  Keyboard skills were going to be important for a student and then later for work. At age five I started using typing games to learn how to type explicitly.  Two things I noticed at school as a result:

By the time I had finished high school I typed at about 60 wpm (words per minute).  Years of university essays saw me improve to 85 wpm which is equivalent to professional typing.  I was immediately eligible for any type of office work because I had proficiency with a computer, entering data quickly due to my typing.  This was all because I’d had explicit typing instruction using typing games when I was young.  It had given me a strong foundation for future improvement and success.

What This Means for the Present

To put this in perspective, that was 1990 to 2005.  We’re now in 2019 and every student has to learn how to use computers for coding and assessments.  Many students access technology from an early age, often without any guidance beyond here is the device and work it out.  Bad habits that come without explicit instruction such as pecking with two fingers rather than using every digit are rife.  It is no accident that ACARA (Australian Curriculum, Assessment and Reporting Authority) in early 2019 have put typing skills side by side with handwriting.  If anything it is long overdue as students who have not developed appropriate typing skills have been disadvantaged.  Our children are in a world where typing skills aren’t a luxury but an increasing necessity.

While there are different typing games, none have the rigour of Typing Tournament Online.  Far superior to what I used as a child, friendlier and more supportive while having the reporting tools to track how children perform.  You can identify where children need more practice so you can help them, making sure that they have every advantage for their future.